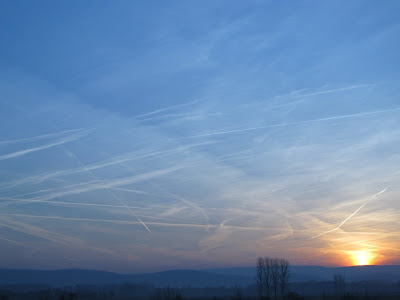 After all! Still not well, but slightly better I feel.

...
Well, similar words I chose 98 days ago, only a couple of minutes afterwards, from one second to the other, to learn I had been pretty wrong.

And since I am - sometimes daily, sometimes hourly - taught quite a few of the consequences one has to take in account when for weeks protracting a pneumonia.

My doc says it may take half a year, one year or even two years until my body will have forgiven me.

The more I do appreciate I am still alive.
Thanks a lot, again, to everybody who sent me good wishes while I was trying to cheat 'Brother Death'.
Now is 'Brother Death' part of Omnium [which - Omnium that is - for those who (still) would not know is ... everything].
And, in a way, there have been interesting dialogues between her / him and me. (Not sure yet, if Brother Death is not a Lady and thus - so to speak - a sister.)
I shall not talk about those dialogues, though.
Would be boring, eh?
Thus, to rather cut it short:
I am back.

However, whenever I thought Now it's better, often within seconds I had to live what somewhen I started to call sister Death is (once again) poking fun on brother Sean.

Yes. There have been moments when I came to terms with my sister. Alright, if you mean, ...

Accepting my death does not mean I was/am jubilating. So many things I want to do, to live, to ... enjoy.

Phew!! Some of the 'breathtaking things' I'd love to enjoy presently I might hardly  survive. :)

Well, and to write an online  di(e)ary is not part of my desires, too.


As said I am grateful.
Times are too interesting to spend them six feet under, would you agree? :)

And: Knowing that the longer I live the shorter I am dead, implies
that the longer I live the less time I have to be diplomatic
Means: In future - not knowing how much future I have - [by the way: do you know?] I shall be even less  diplomatic than ever I was.
Isn't this sad?
Not to call evil persons evil 'cause one does fear the consequences?
Mind you! Not necessarily the consequences for oneself, but those for one's family, and thus for those who perhaps would prefer yourself 'just to shut up'.
... ha ha ha ...
The scissors in one's head ... spare the censor.
With no respect: Fuck them! All of them. [The scissors and the censors]
My! I am so glad there don't exist Omnium-flags.

Imagine: Omnium flags being burned in ... well: anywhere. By people who don't even know what Omnium is.

What a ridiculous tragedy.

A great chance for improvement, would you agree?

I'll try to do my very best, anyway.