Typo in the title?
Nah. It's just that I would not let a tiny T spoil an avantgardistic alliteration.
Posted by Sean Jeating at 19:19 9 comments:


Interesting: While the US Supreme Court only recently has unanimously solidarised with the criminal bastards of Monsanto, on Saturday in several countries demonstrations are planned. 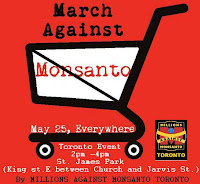 If there will get 'millions (on the streets) against Monsanto ... we shall see.
Or not.
Anyway, my deep throat intends to participate ("with my walker").


I have a dream: One day neither the politicians nor the journalists on their payroll, nor their unscrupulous lawyers nor even their ruthless privat armies will save the masters of Monsanto. One day their utterly mighty and rich beneficiaries will have nothing to eat but their fucking certificates, their patents and stocks.
Perhaps though, if mankind is lucky, they will already have been sent to hell. After all, in God they trust.
End of the rant.
Do I feel better now?
Well, not really.
But after all, I spake out.

And here a copy of one of those documentations that now and then out of the blue would disappear, but there's no round-up against the truth, obviously.
And I am pretty optimistic, there will never be one.

* Well, for quite a while  – about three years? –  I have not mentioned one of the most evil bunches of bastards on this planet: Monsanto & Co.

However, my stats are decreasing, and thus I think some visits from St. Louis and diverse branches of the evil might do my stats good.
Posted by Sean Jeating at 00:37 6 comments:

The Gate is Open

Labels: Friday is Skyday, On the road, photography

Typo in the title?
Nah. It's just that I would not let a tiny T spoil an avantgardistic alliteration.
Posted by Sean Jeating at 00:22 8 comments:

Waiting at a traffic light