He does (probably) not know sorrow and joy, yet. Born 13 days after one of his grandmothers' death and eight days after the funeral, today he was introduced to his great-grandmother. They did not see eachother, though. ... :)
Posted by Sean Jeating at 22:36 7 comments: 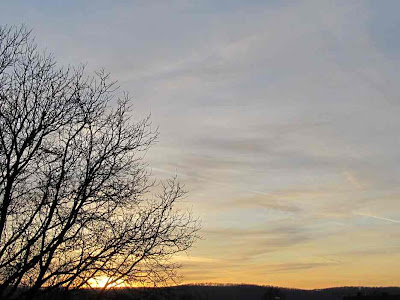 Just for those accidently stumbling upon Omnium:
Typo in the title?
Nah. It's just that I would not let a tiny T spoil an avantgardistic alliteration.

When dancing is not enough ...

A man, his elbows leaning on kitchen's sill;
his head resting in his palms;
himself: lost in thought;
in many thoughts ...

Suddenly his eyes notice:
A woman in a wheel chair.
Pushed by a man.
Walking fast.
Escorted by a an Australian shephard.
Behind this trio:
A couple in their 30s.
She: pregnant in the 36th week, leading a 14 years old mongrel, somehow a mixture of a Romanian Mioritic Shepherd Dog and an Irish Wolfhound.
He: Leading another Australian shephard.
Both, respectively the four of them:
Walking fast, too.
Somehow too fast.
As if running away, trying to escape.

Trying to escape what?

Like a procession. Somehow surreal. Described by García Márques or Borges.

The man does not dare to move.
Hoping brother-in-law, niece and her husband will not look up and ...
think: bloody voyeur.

The 62nd anniversary of the old woman's marriage.
Oh, how does she love him; him who died almost 12 years ago.
They will never understand.
A 16 year old girl in love with a 20 year old boy who soon will be forced to fight a war.
Flight/expulsion/displacement;
waiting for him: ten years lost!
Their youth!

She had loved her son's girl from the first moment.
Why?!

Why will she not be allowed to hold her grandchild in her arms?
Nine months.
Nine months ago it began.
Pain in the back.


She? She who four months ago has thought she'd not see her great-grandchild now, after she has got this pacemaker will – probably – not only have to follow the coffin of her daughter (-in-law), but about two weeks later hold her (the daughter's) grandchild in her arms.

The man, his elbows leaning on the kitchen table,
his head resting in his palms,
does nod. Imperceptible. Almost.


May 2012 bring you and those around you:
Health
love
peace
inspiration
success
leisure
contentment
and
- in case something does not immediately work -
lots of serene calmness and calm serenety.
And having got everything, or not,
let us never forget:
We need a little madness.
Let's dance!