Posted by Sean Jeating at 23:51 No comments: 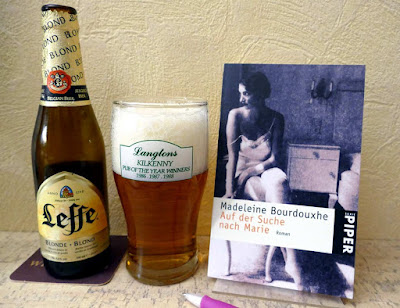 A blissful repose of nothingness

We can regard our life as a uselessly disturbing episode in the blissful repose of nothingness.

In August I mentioned at Andrew's that I had bought a "bunch" of different bottles from the other side of the Channel and that  some for me "strange" names inspired me to what might become a little series: Beers'n'Books.

Already "Changing of the Tone" again

As everyone knows yesterday, September 5th, was 'Changing of the Tone' in Halberstadt. Just in case you happened not to be amongst those connoisseurs in St Burchardi who all excitedly earwitnessed the thrilling moment, and therefore feel inconsolable: the spheric sound will not change until February 5th, 2022.
So when arriving on February 4th you will be able to kill two b ... ahem ... to hear two tones of the John-Cage-project ORGAN² ASLSP within 24 hours.

Well, and in cage case you can't get enough, what about quickly booking one of the remaining 620 years and get your name "eternised" on a metal plate. Costs only 1200 Euro.

As mentioned twelve years ago, personally, I intended to book the year 2525, but then I thought I should retreat in favour of Zager and Evans. Since I have been ranging between 2632 and 2222, but right now I think I shall ask them to offer 2641. I'd really like listening to the silence, after all the noise.


PS:
In honour of John Cage I have been writing this post, as I did in 2008, if not as slowly as possible, at least very very slowly.
And I am quite sure that not only those amongst you who can't read fast will appreciate my gesture.

PPS: For those who wish to buy one or more of the words written above: There will soon be a price-list available.

PPPS: Solvent Omnium-lovers who wish to book one or more posts to be published from October onwards, with immediate effect can offer their bids. Just don't be shy - bid high.

Organ2/ASLSP (As Slow as Possible)

New York Times article from May 2006

* [For first time visitors]: Typo in the title? Nah. It's just that
I would not let a tiny T spoil an avantgardistic alliteration.
Posted by Sean Jeating at 20:24 7 comments:

Waiting for Godot
Posted by Sean Jeating at 20:20 3 comments:

Wish he could celebrate his 80th