Potpourri (not only) for Mark


* [For first time visitors]: Typo in the title? Nah. It's just that
I would not let a tiny T spoil an avantgardistic alliteration.
Posted by Sean Jeating at 23:31 10 comments:

Shout, shout, up with your song!
Cry with the wind, for the dawn is breaking;
March, march, swing you along,
Wide blows our banner, and hope is waking.
Song with its story, dreams with their glory
Lo! they call, and glad is their word!
Loud and louder it swells,
Thunder of freedom, the voice of the Lord!

Long, long—we in the past
Cowered in dread from the light of heaven,
Strong, strong—stand we at last,
Fearless in faith and with sight new given.
Strength with its beauty, Life with its duty,
(Hear the voice, oh hear and obey!)
These, these—beckon us on!
Open your eyes to the blaze of day.

Comrades—ye who have dared
First in the battle to strive and sorrow!
Scorned, spurned—naught have ye cared,
Raising your eyes to a wider morrow,
Ways that are weary, days that are dreary,
Toil and pain by faith ye have borne;
Hail, hail—victors ye stand,
Wearing the wreath that the brave have worn!

Life, strife—those two are one,
Naught can ye win but by faith and daring.
On, on—that ye have done
But for the work of today preparing.
Firm in reliance, laugh a defiance,
(Laugh in hope, for sure is the end)
March, march—many as one,
Shoulder to shoulder and friend to friend.

The March of the Women

Women's Suffrage in the United Kingdom

Entry of the Gladiators

All the Hemispheres
Leave the familiar for a while.
Let your senses and bodies stretch out
Like a welcomed season
Onto the meadows and shores and hills.
Open up to the Roof.
Make a new water-mark on your excitement
And love.
Like a blooming night flower,
Bestow your vital fragrance of happiness
And giving
Upon our intimate assembly.
Change rooms in your mind for a day.
All the hemispheres in existence
Lie beside an equator
In your heart.
Greet Yourself
In your thousand other forms
As you mount the hidden tide and travel
Back home.
All the hemispheres in heaven
Are sitting around a fire
Chatting
While stitching themselves together
Into the Great Circle inside of
You.
From: 'The Subject Tonight is Love'
Translated by Daniel Ladinsky

Posted by Sean Jeating at 22:49 No comments:

Recently [2008] - I was just reading the last chapter of The Bastard of Istanbul - I heard Tetrapilotomos chuckle, which induced following dialogue:

- Blimey, no wonder there's a steady increase of population in Turkey.

- What are you busy with, Tetrapilotomos?

- I see. And what does this have to do with the population growth in Turkey?

- Do you know what aureum caput regni means?

- Golden head of the imperium, or so?

- Not bad. And caput orbis?

- Head of the world.

- Not bad. And what's a colloquial German word for broken?

- Kaputt. Spelled with one t less in English it means a) utterly finished, defeated, or destroyed and b) unable to function.

- Not bad. And do you know what a condom is being called in Turkish.

Efficacy of the Death Penalty

Efficacy of the Death Penalty

[3] All men are by nature prone to err, both in private and in public life, and there is no law which will prevent them; in fact, mankind has run the whole gamut of penalties, making them more and more severe, in the hope that the transgressions of evil-doers might be abated. It is probable that in ancient times the penalties prescribed for the greatest offences were relatively mild, but as transgressions still occurred, in course of time the penalty was seldom less than death. But even so there is still transgression.

[4] Either, then, some terror more dreadful than death must be discovered, or we must own that death at least is no prevention. Nay, men are lured into hazardous enterprises by the constraint of poverty, which makes them bold, by the insolence and pride of affluence, which makes them greedy, and by the various passions engendered in the other conditions of human life as these are severally mastered by some mighty and irresistible impulse.

[5] Then, too, Hope and Desire are everywhere; Desire leads, Hope attends; Desire contrives the plan, Hope suggests the facility of fortune; the two passions are most baneful, and being unseen phantoms prevail over seen dangers.

[6] Besides these, fortune contributes in no less degree to urge men on; for she sometimes presents herself unexpectedly and thus tempts men to take risks even when their resources are inadequate, and states even more than men, inasmuch as the stake is the greatest of all — their own freedom or empire over others — and the individual, when supported by the whole people, unreasonably overestimates his own strength.

[7] In a word, it is impossible, and a mark of extreme simplicity, for anyone to imagine that when human nature is wholeheartedly bent on any undertaking it can be diverted from it by rigorous laws or by any other terror.

with thanks to Michael Gilleland at  Laudator Temporis Acti

Posted by Sean Jeating at 22:59 No comments:

The sawing goes on

Humble attempt to translate as literally as possible.
Suggestions for improvement are welcome.

They sawed the branches on which they sat
and called out to eachother their experiences,
how one could saw faster, and fell
with crack into the depth, and those watching them
shook their heads while sawing and
went on sawing

If stupidity is joined by power

The Ignorant disregards the instruction.
And if his stupidity is even joined by power
he does not shy away from any means of destruction. 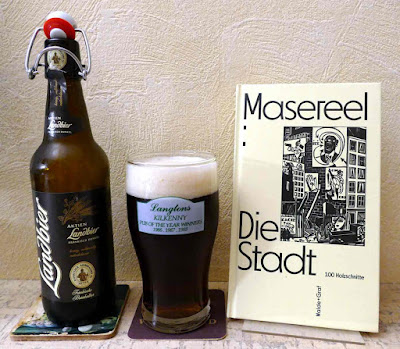