The President of the United States is (said to be) the most powerful human being on this planet.

This explains a lot.
Posted by Sean Jeating at 23:29 7 comments:

Nothing is as old as yesterday's news, unless you would not find it in "your" media.

Alright, a conference titled "Muslim World in Transition: Contributions of the Gülen Movement" being hold, let's say in Erzurum would probably not attract many media to send a reporter team to Anatolia.

But when above mentioned conference takes place in London and is being inaugurated at The House of Lords one might think this would attract some interest in times when the Labour Party's "favourite think-tank" favours the idea of downgrading Christmas in favour of festivals from other religions to improve race relations.

Well, it's good for Fethullah Gülen to have a Journalists and Writers Foundation spreading his words and running his own newspaper.

The final sentences: "Alas, if the Islamic world will be able to breed a “dynamic” interpretation of its faith, then Turkey, it seems, will be one of its main architects. So, keep watching."

For a beginning, apropos watching: what one would neither find in the articles above nor in this opulent file, you will find in this enlightening article by ... ? ... by ... ? right: by Mustafa Akyol.

There are many more. Too many for one post.

More about this issue as soon as my closest friend is back. Today he sent a message.
"Am in Erzurum. The
worshippers of dead
sardines' heads are
forming a
supranational elite.
Until soon,
kind regards,
Tetrapilotomos."

When will we learn from history? 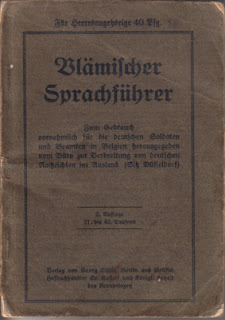 Today, November 11th, at 11 a.m. [plus 11 seconds], those Germans being fond of carnival, celebrated the start into their so-called fifth season.

Today, November 11th, at 11. a.m., 89 years ago the armistice being considered as the end of the first World War came into effect.

Isn't life strange? On the same day, some people are celebrating carnival, others are remembering the victims of war.

No, I do not mind the carnival revelers along the Rhine and elsewhere getting beside themselves with joy.

[armistice day] the story behind it

I do have nothing essential to add to what James wrote.

Only this: The orders above which I think need no translation I took from a "Flemish phrase book", printed (around 1915?) "primarily for the German soldiers and officers in Belgium".

I do hope there will no phrase books being printed again - in whatever language(s) - containing such phrases.
Unfortunately, I am no magician, and therefore my spell to learn from history will (probably) not come into effect. 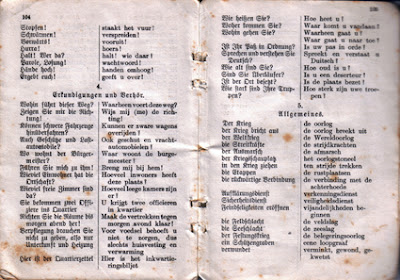 A Fortune for Talking Blairney

What might, f.e. an engine-driver grossing about 2.100 Euro think when reading this?

As one who would not envy a Ronaldinho or any other "star", because being offered such sums I should not deny, I do just ask:

Why would people pay such astronomic sums for ... almost nothing?

Why would - to give just another example - the German power company ENBW while announcing the necessity of rising energy prices, offer Al Gore 180.000 Dollars to appear in front of a handpicked audience?

Why would Al Gore demand: No photos during the event, no quotes, no articles?

Did he tell something different to his handpicked audience?

If not: why did ENBW-chairman Utz Claassen not charter a cinema for his "friends" / clientele? Would have been a tiny bit cheaper, wouldn't it?

Who does get what advantage / profit when paying a fortune for ... almost nothing?

Apropos Al Gore: A well deserved laudation on (of? - ah these prepositions!) the "Peace"-Nobel Prize Winner and on the Nobel Prize Committee you will find here.

As for the rest:
Well, it's said the devil would always relieve himself on the biggest heap.

The Peace of the Night!
Posted by Sean Jeating at 20:42 4 comments:

Time for a refreshing kiss 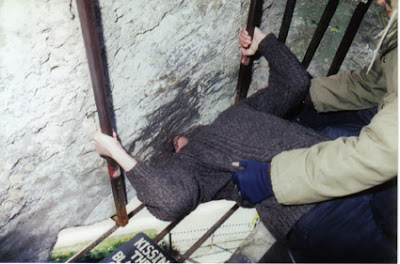 The comments on my latest post remind me of that it's time for again kissing the Blarney Stone*, in order to refresh my magic power of convincing eloquence. :)

* not to muddle up with a certain Blairney Stone
Posted by Sean Jeating at 22:03 No comments:

There is still hope

what a marvellous week we had, Tetrapilotomos and I,
he brightened the earth, I polished the "Why" [sic: not the "sky"]

In other words: I did some research.

And the few hours Tetrapilotomos and I shared we spent watching an old spider
weaving its net and then waiting for its prey.

Such tiny questions, and what reactions. :)

As I know, my frequent readers and my friends will let dispense lenity;
therefore, some lines exclusively for leaders beyond authority:

It's not easy to make a living. You may have a family. Therefore I am happy you have found a job that fits your abilities. Last not least, undoubtedly you are just fulfilling your order
[which, by the way, most war-criminals would say when being accused of atrocities].

Indeed, my heart rose like a falcon up to the sky when noticing that one member of your team of leaders beyond authority would even check the label "Omnium". A real connoisseur. Chapeau!

I hope you enjoyed widening your horizon at the expense of British tax-payers, although I am sure with a little more organising ability at least one of you could have checked the books and within minutes sent me the answers, at least the one for question b.

Ah well, nobody is perfect.

Now you read my advice which is, of course, free of charge - as I wish to disburden your tax-payers - I am waiting with burning patience, though.


And now - not to leave you lost - some facts for you, dear regular readers:

a) The leader beyond authority visiting via Common-purpose-net just stayed 1 min 56 secs.

b) afterwards I got visitors via the mentioned GSIs and some other enthusiasts; one (?) would even stay for more than nine hours [although I hope there was a shift changeover; it's not good for one's eyes to be online such long].

Now wouldn't I hide my light under a bushel, but this was amazing.
Such innocent tiny questions - which by the way occured while researching into something completely different - and such a traffic on my site?!

There is no reason to mistrust a charity - I repeat: a charity - with such a charming name, isn't there?

I have no doubt at all that a charity calling itself "Common Purpose" would intend nothing else but the best for humankind. In other words: I felt sure by doing a little research I should easily find reliable independent sources giving evidence of that all these leaders beyond authority are kind humans.

Unfortunately, up til now I could not find any reliable independant source telling something positive about Common Purpose.

Still, there is some hope.

The altruistic leaders beyond any authority are weaving their net in quite a few countries. And as when a boy I was lazy in learning vocabularies I do not speak as many languages as I should like being able to speak [today].
Therefore I asked some colleagues in various countries to find as much evidence as possible that Common Purpose is as charitable, humanitarian and philantropic as they are telling on their websites.
As soon as there is a positive feedback I shall let you know.

Meanwhile I can unfortunately recommend just websites where you would find nasty bloggers writing nasty things about Common Purpose.
To me it sounds like a conspiracy theory. But who am I to judge what is right, and what is wrong?

The best will be you take your time, read carefully and form your own opinion.

The following five should be read one by one :


Well, and even the Devil in his kitchen has obviously "been aware of Common Purpose for some time and may well write about it at some stage". In the meantime, he offers to watch a video about "this rather sinister organisation".

Apropos "sinister": He did not use one of his favourite words which sounds like the name of a great German philosopher, and therefore I hope there is still hope.