Same Procedure as Every Year

If counted well the Germans today can/could watch Dinner for One (The 90th Birthday) 16 times at different times on various TV-channels, and apart from the original in various German dialects, inclusive Schwiizerdütsch (Swiss German). Very strange folks, the Germans. Well, judge for yourself.

Labels: Miscellanies, On the road, photography

Waiting for Godot
Posted by Sean Jeating at 20:00 4 comments:

Today it's to be read on the frontpage of an English newspaper that Merkel wants Britain to crawl across broken glass.
Cited is an unspecified source as saying that the German chancellor was determined to see Britain suffer rather than reach a compromise on the sticking points of future government aid and fishing.

And who would not immediately and wholeheartedly believe?! After all it is coming from excellently educated journalists whose living is clean, whose manners are impeccable and who would never lie.

The more surprised I got, when my always trustworthy and absolutely reliable source let me know that she had heard by someone who knows the cousin of the doctor who had once got the opportunity to look in said journalist's brain, that instead of grey matter the one who had written the above has brown matter in his head.
Before I could ask for more details my always best-informed source went on:
"There is no need to worry for the average English(wo)man who does not only want her respectively his money but also her  respectively his sovereignty back.
Alternative fact is that each week 350 million quid will be pumped into the NHS, farmers will become rich, and the blessed English sovereigns will not be able to eat all the fish brave English fisherman will bring back from sea, escorted and protected against all the evil fishermen from abroad."

I hardly could believe my ears.
Finally my extraordinary credible source quoted Heinrich Heine on his 223rd birthday:

P.S. On request of A.Brit, readers may in their grey (sic!) matter replace England and English with GREAT Britain and British, because, of course, the people in Northern Ireland, in Scotland and Wales are blessed GREAT British sovereigns, too, and thus also will enjoy all the most wonderful fruits of what is their majority's will.

The Noble Handke, Karadžić and the Leuchter Report

Reading what I posted last year on December 10th, I thought it's worth to get re-posted.

How cometh, tonight I remember an episode of October 10th? Anyway, I do, as well as I know one ought not to disturb my friend while he is busy with proof-reading his 1669 pages short opus magnum "Pre-Assyrian Philately in a Nutshell".

I, entering his sanctuary.

He, without looking up: You would not dare to ask for my opinion about the Nobel Comitee's decision?

– You are kidding, Tetrapilotomos. Don't like Peter Handke, eh?

– It's easy to criticise. Did you read anything of him, perhaps, The Goalie's Anxiety at the Penalty Kick?

- This and enough to see that, from the beginning, when Offending the Audience, he was an overrated bore. And now he's but an old fart.

- He will be able to live with that.

– May I ask if you read A Journey to the Rivers: Justice for Serbia?

– Yes. 1996. In the Süddeutsche Zeitung. In the same year I also read "The Poet's Anxiety at the Reality"*, in which 16 journalists and authors had answered to the Handke Report, amongst them Marcel Ophuls, Dževad Karahasan, Bora Ćosić and Günter Kunert. 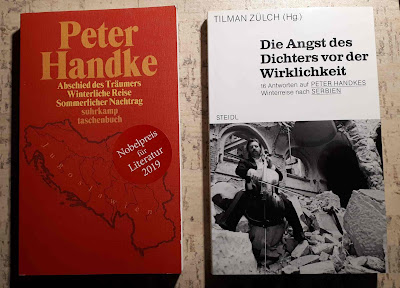 – Yes, Would have been the right title for what obviously is his opus magnum; showing his character in a nutshell.

– You would not mean, Handke Report analogue to a certain Leuchter Report, would you?

– Now you surprise me, Sean.

– You mean, he made his winterly journey allegedly to prove Serbian atrocities only to find out: Fake news?

– Well, fake news make presidents. Why not Nobel Prize Winners? In other words: Why should very young external advisors of the Nobel-Prize-Comitee be not as stupid as simple voters?

– Well, perhaps one day they find time to read "The Little Red Chairs" and come to the conclusion that, amongst a few others, Edna O'Brien would have been the better choice. 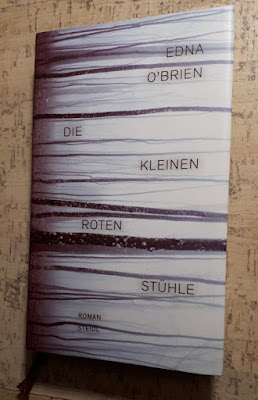