Ah, how interesting to re-read this after 27 years (you may click to enlarge): the Irish Times - and the Irish Press which I was too lazy to scan. Loads of words filling pages. 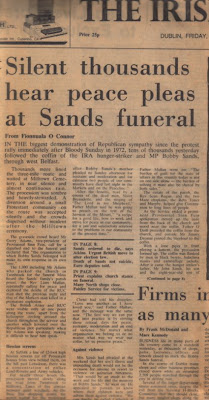 However, it's the crying 'elephant' - what a metapher! - I'd never forget. It's telling more than millions of words. A few more though: Bobby Sands was 27 when he died. And now was the 27th anniversary of his death.
Mitchel McLaughlin was 35 when Sands died, Gerry Adams 32, Martin McGuinness 30. They are 62 now respectively 59 and 58. 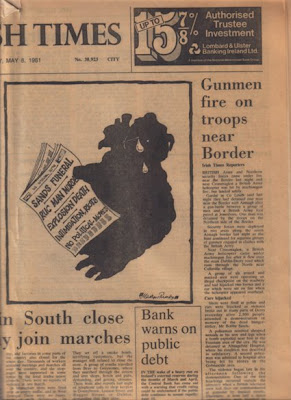 Not that I don't wish these gentlemen well. But I find interesting that - to my knowledge - nobody ever asked why none of this triumvirat well known for talking a lot about solidarity, joined the hunger-strike in 1981.
Ah, well, Ian Paisley did not kill anybody, and so didn't Maggie Thatcher, did they?
And the moral of the story: It's nice to have indians when you are the chieftain.
The peace of the night.
Posted by Sean Jeating at 22:29