As for some crossroads

When reading an interesting little crosstalk about crossroads in the comment section to Stan's fascinating post Blather and blarney and blindfolding the devil which to read and enjoy herewith I do again wholeheartedly recommend, it crossed my mind that once in the past millennium with great interest I read this book. 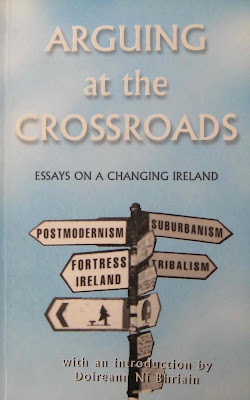 Well, actually I had just been after - sic! :) re-reading it only a couple of weeks before, which was the more interesting, as the reader had the advantage to know more about the past 13 years than the contributors while writing their essays.

John Hume, f.e., could not know that in 13 years time there'd be a heated discussion whether a majority of the Irish in the(ir) second referendum about the so-called Lisbon-Treaty within one year should vote "Yes" or once again "No".

Still, his essay Everything is Political in a divided Society could easily be written in September 2009.
Judge yourself.
Here's a short excerpt taken from “Arguing at the Crossroads – Essays on a changing Ireland”, 1997, pp 105/106:

"[...] The renewal of Ireland is scarcely thinkable outside the process of the development of a political and cultural Europe. [...] It (the EU; sj) is the greatest example of conflict resolution in the history of humanity. Nations who for centuries invaded each other, occupied each other’s territories, expelled each other’s peoples and massacred each other, came together freely to bury their old hatreds. [...] But the fact that these nations have preserved their identities is even more encouraging. It proves that institutions can be created to pursue common objectives without sacrificing Europe’s diversity of culture and traditions.

[...] The more people are given responsibility for their future, the more they show their ability to take such responibility. The more people believe that their political institutions belong to them, the more effective those institutions will be.
[...] Working for a new Ireland in a new Europe [...] It is time to look honestly at the virtues and defects of our society and find new answers capable of preparing us for the challenges which lie ahead. It is time to paint a realistic portrait of society and to abandon the consolation of outmoded imaginary mental pictures. We need the courage to imagine new perspectives which will help us to formulate answers to the questions of social diversity, possible political institutions and the eventual resolution of our conflict."