As time goes by

Mrs. J. does sometimes worry for the statics of the house, but that's another story. :)

And neither I intend to tell that I was ten years, one month and nine days old, when John Fitzgerald Kennedy was murdered (by whomsoever), nor to bore with my memories.

Much more interesting I found when today re-reading this extra edition that 40 pages (mainly containing of large-sized Black&White photos) then would have cost 50 Pfennnig (ca. 25 Euro Cent), that 'Illustrierte' would have been spelled Illustrirte, and that it could have been knocked together within less than 48 hours and thus before Jack Ruby murdered Lee Harvey Oswald. 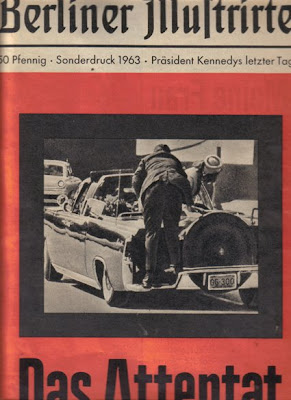 Sorry for the quality. (A4 scanner)
Well, and I find interesting that today 45 years ago I would not at all have taken notice of that on this very day also an author had died, parts of whose work some years later I'd devour with pleasure - Aldous Huxley.

Parts of his work? Well, I prefered his first two novels to those on which his fame mainly bases.

Most impressed, though, I was and still am by one of Huxley's short stories: Klein Archimedes / Young Archimedes.

So, if you find you must repent
from side to side in argument,
at least don't use your mind too hard
but trust my instinct - I'm a bard.

Couldn't have put it more nicely than Robert Frost. :)