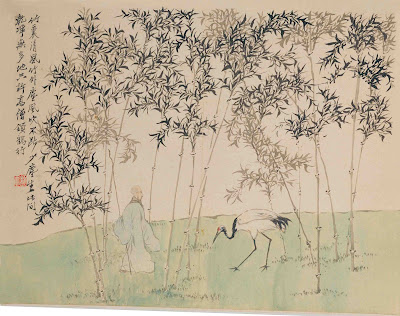 Walking a Crane in a Bamboo Grove
Undated
From 'Figures and Landscapes, after Poems by Jin Nong'
Album of twelve leaves, ink and colour on paper, 24.3 x 30.7 cm
Palace Museum, Beijing

The Museum Rietberg Zürich, in collaboration with the Metropolitan Museum of Art, New York, [til 12 July 2009; sj] presents an exhibition dedicated to the Chinese painter Luo Pin (1733–1799). In China, Luo Pin is renowned as one of the most original artists of his time. He was seen as an expert in the supernatural, a man who saw and painted ghosts. [...]. 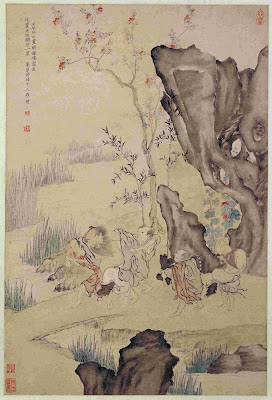 Some of his contemporaries described Luo Pin as a virtuous scholar, a pious Buddhist, caring husband and devoted father; others saw him as a wayward eccentric and a charming partygoer. His multifaceted personality is also reflected in his versatility as an artist. This is the very first time that such a large selection of Luo Pin’s greatest works has been shown in the West. Among the highlights of the exhibition are a number of masterpieces loaned by the Palace Museum in Beijing and the Shanghai Museum.

Luo Ping was born in 1733 in the city of Yangzhou, a flourishing cultural and commercial centre. His literary and artistic talents brought him attention at an early age and attracted the interest of Jin Nong* (1687–1763), one of the leading figures in Yangzhou bohemia, who accepted the 23-year-old Luo as his student. Until Jin’s death, the two men maintained an unusually close friendship, unique in the history of Chinese art. Both Jin and Luo were among the Eight Eccentrics of Yangzhou, a loose group of individualistic painters who revolutionised Chinese art. 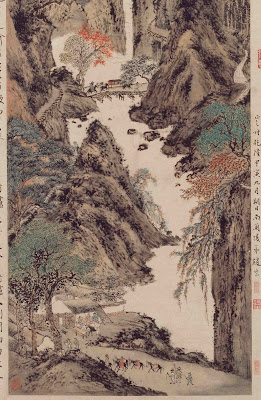