Well, actually I intended just to title '... and some more', but would first time visitors have known I were refering to the previous post? [Ha ha, no link here!]
After all, one does not need to be arrogant to not expect too much from the average 'stumblers upon', hm? :)

Anyway, why Whom the (snow-)bells toll?
Nah :), not primarily as this would offer the opportunity to mention en passant, that about thirty years ago colleagues used to call me Hemingway, but because Schneeglöckchen translated in English are not snowdrops but snowbells.

Ahem ... end of the beforegoing.

It's often said that nature is 'magical'. A few people in Haiti, Chile and Turkey, to name but a few countries, would perhaps / probably not wholeheartedly agree these days, especially not those who are dead; well, and those who had / have to learn that what humans use to call natural desaster (or so) does not necessarily increase fellow sufferers' ethic standards.
Oh, by the way, did you hear, watch anything about Haiti during the past fortnight?
Nothing? Ah, I am so glad! Isn't this global solidarity wonderful a thing? Some benefit galas, and before you could say f.e. religion or helpfulness, all Haitians got a new roof over their heads, enough to drink and eat; hospitals, schools, ah ... the whole infrastructure was renewed.
Isn't it a pity that good news are (considered to be) no news?
Still, isn't it wonderful to live in these times? In times when no wo/man feels so desperate to fall on her/his knees and cry "Oh, please, God, help me!", as there's always a fellow human not only willing to be g(o)od but really does help?
Brave new world!

What you are witnessing, in case you did not a while ago surf on to the next world-shattering important blogger(s) is, what a tiny step it is from taciturnity to logorrhoea as, of course, I could just have written: 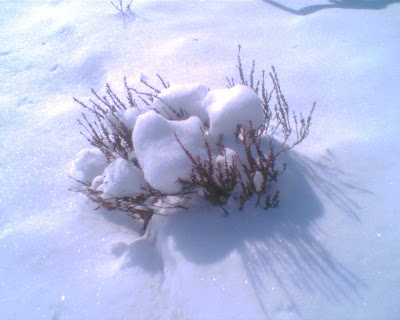 This was what I saw on Saturday. 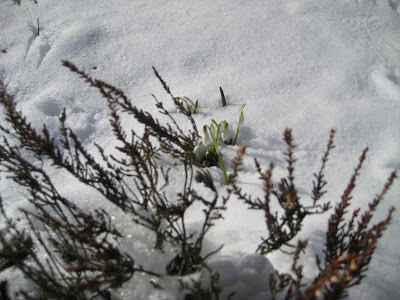 This was what I saw on Sunday. 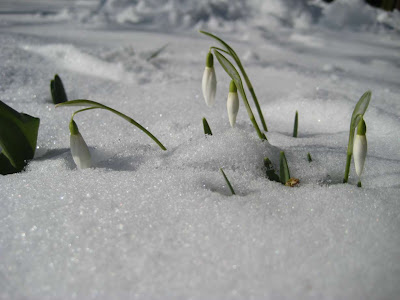 And this when looking a bit closer.
Apropos, looking closer. Just thinking of everything's fine by now in Haiti, Chile, Turkey .... ah, and, of course, in China's democracy, I am. Liu Xiabo is free!! And so is Hu Jia. No priest or imam letting a little boy suck their holy pricks, no freedom fighter in Kongo or elsewhere raping a girl or woman together with his fellow heroes, and when after some seconds his manhood's getting limp, letting do his bajonet - oh, well or a fucking wooden stick - the rest to increase the woman's delight; Mr. Obama has declared Order 81 null and void, and consequently the Masters of Monsanto became bio famers; in Nigeria ... ...

... ah! Stop! This could have become such a lovely little post!! Lovely little flowers in snow. How cute! Harbingers of spring. Now, isn't there still hope?! I mean, it does not happen often that seasons change, does it? It's really surprising.

Rather than going on boring you, I quit and go on writing three or four pages more of what's going to become another glorious novel that will shatter the world ... not.
Who cares?! As long as readers shovel money upon me. I consider it better than shovelling snow, anyway.

Even better than wasting your time.

The peace of the night.
Posted by Sean Jeating at 22:50